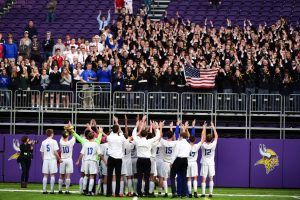 St. Thomas Academy players wave at their classmates in the stands after defeating Northfield 1-0 in two overtimes in the Class A championship match of the State Boys Soccer Tournament at U.S. Bank Stadium in Minneapolis on Thursday, Nov. 3, 2016. (Pioneer Press: Scott Takushi)

St. Thomas Academy coach Noel Quinn should have had a decision to make.

A run from junior midfielder Logan Davis that drew a foul in the second overtime with the score tied 0-0 earned the Cadets a penalty kick to win the Class A state title over Northfield. But who would take the kick?

Turns out, Quinn never had the chance to make a choice. Senior defender Devin Kennedy went and grabbed the ball. This would be his shot.

Prior to the kick, Kennedy was approached by junior midfielder Amanuel Bird.

Kennedy was oozing with confidence, adding he felt chills creeping up his back at the thought of striking the winner. Then he made eye contact with Northfield senior goalie Cristian Fuentes-Rivera.

“The goalie was kind of staring me down, making me a little nervous,” Kennedy said. “Kind of making me second guess where I was going to kick.”

Kennedy was going left. He always goes left. But did Northfield know that? There was no time to deviate from the plan. Kennedy hit it left, the same direction Fuentes-Rivera dove. But Kennedy beat him, sneaking it into the lower corner to give third-seeded St. Thomas Academy the 1-0 victory.

“I was confident,” said Fuentes-Rivera, who made nine saves on Thursday. “I’m good at PKs. I’m the best goalie in the state. I went the right way, I just didn’t dive enough. … It’s just frustrating. Super, super frustrating.”

“It feels like we’re putting our school in the history books,” senior defender William Mayleben said. “But it’s not just about this team, it’s about everyone who’s ever come from St. Thomas Academy through the state tournament. … All the older guys have been trying to get this for so long, and the fact that we finally got to have it … I think they deserve it too, and they should share in this joy.”

The title comes fresh off St. Thomas Academy’s third-place finish in 2015. That was a nice season, but Kennedy said it “didn’t cut it” for this year’s seniors.

“We kind of wanted more,” he said. “We had the right players this year and worked really hard in practice, and we got it done.”

The title also provided a touch of redemption for Quinn, who is in his first season as Cadets coach after previously coaching the girls team at Eden Prairie. Quinn and the Eagles fell in the Class 2A state title game to Eagan in each of the past two years, including a shootout defeat last season.

“I would like to hope that I would be as proud and feel the same if we hadn’t won,” Quinn said, “but it’s nice. Two years in a row losing, and then the third time lucky or whatever, yeah, it’s nice. But it’s a result of all the hard work the boys put in from Day 1.”

The Cadets controlled play for much of the first half as Northfield attempted to organize its back end, but couldn’t break through as Fuentes-Rivera repeatedly turned shots away. The fifth-seeded Raiders (16-4-3) responded in the second half, generating numerous chances, often in the counter-attack. But every time Northfield had a dangerous look, Cadets senior goalie Matthew Wahl was there.

Raiders coach Scott Wopata said a game ending in an overtime penalty kick is probably the worst possible conclusion. Certainly the most painful.

“It’s clearly a tough way to walk away from the game,” Wopata said. “But at the same time, there wasn’t a lot of difference between the teams, so it’s kind of a fair way to end it.”